How I met Julie Newmar 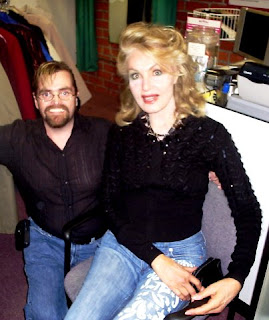 Saturday night, May 2nd I attended “Cheap Chic” Fashion Show and Auction. The statuesque Julie Newmar, the original Catwoman from the Batman series played hostess and emcee for the night. The Fashion Show featured clothing from Out of the Closet store(s). “Cheap Chic” Fashion Show and Auction was at Out of the Closet in Hollywood at 6210 Sunset Blvd. The theme of the fundraiser was wonderfully titled Tough Times, Great Solutions!” with assistance by Designer Louis Natividad. Proceeds will benefit AHF, the largest AIDS group in the US, this organization currently provides more than 15,000 free HIV and STD tests annually in California through a community-based testing program. Cocktails were served from 7:30 to 9:00 PM, the models were decked out in trendy and affordable clothing and costumes straight from the racks of “Out of the Closet.” Tickets were only $15.00 and they sold out quick. And they offered Free HIV testing, by AHF’s counselors. 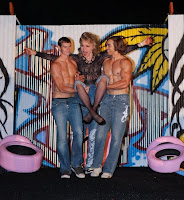 Parking was terrible of course, but we finally found a public lot about half a block north of Sunset. I was ready to start snapping photos shortly after we arrived, but me being a genius and all had forgotten that I had taken the batteries out of the digital camera that morning to replace the ones that were dying in my cordless mouse. Needless to say I tried using my cell phone camera, but it doesn’t have a flash and I have never been able to take a decent picture with it. They all come out blurry from my shaking hands, never the less, always there when I need something. Jim my partner of 9 years as of April 30th decided to walk across the street to Rite-Aid and get batteries. So I was able to snap one good photo of Julie Newmar and was satisfied with that, but secretly wanted to have my photo taken with her.

As the night drew to an end, the Out of the Closet store opened so that people attending the soirée could make purchases’. I think I spent about $30.00 and got 12 really nice shirts, Lucky me as I was taking my purchases’ to the register who do I see? The statuesque Julie Newmar, right by the cash register having a seat. I asked if she would mind having a photo taken with me, of course she was happy to do so. All in all it was a pretty productive night; I h

elped a charity, got some nice duds and met Cat Woman.

About “Out of the Closet”

Out of the Closet, the world's most fabulous thrift store, is a chain of thrift stores in Northern and Southern California owned and operated by AIDS Healthcare Foundation. As the nation’s largest retail fundraising vehicle for HIV/AIDS medical care, the “Out of the Closet” Thrift Store chain generates 30,000 donations and nearly 1 million shoppers a year. In addition to retail operations, seven of the stores offer free, confidential HIV testing by certified counselors through AHF’s innovative prevention and testing program, the largest such program in California. Since 1990, the “Out of the Closet” Thrift Stores have helped raise funds for AHF’s HIV/AIDS medical care, testing and prevention programs. Ninety-six cents of every dollar earned goes to the care and treatment of people living with HIV/AIDS.

Out of the Closet Thrift Stores are renowned for donations made by today's most popular celebrities and major television and film studio production houses. In addition, at least three film production companies have shopped and used OTC for wardrobe and set needs, some even re-donated the goods post production: "Monster" (2003), "Real Women Have Curves" (2002), "Relax, It's just Sex" (1998), and "Shopgirl" (2005). You just never know what you might find at an Out of the Closet Thrift Store and at the thrift store price!

AIDS Healthcare Foundation (AHF) is the nation’s largest non-profit HIV/AIDS organization. AHF currently provides medical care and/or services to more than 100,000 individuals in 21 countries worldwide in the US, Africa, Latin America/Caribbean and Asia.

Email ThisBlogThis!Share to TwitterShare to FacebookShare to Pinterest
Labels: AHF, Fund Raiser, Gay, Out of the Closet

Promote Your Page Too